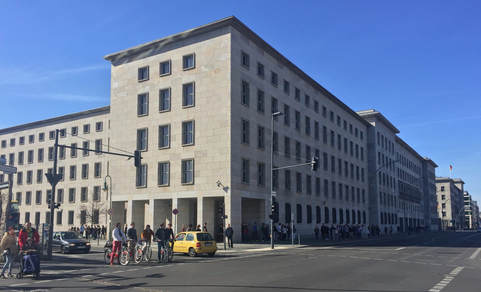 The HQ of Hermann Göring's Luftwaffe survives and is now the Federal Finance Ministry
During World War Two, under Reichsmarschall Hermann Göring's leadership, the Reichsluftfahrt Ministerium (RLM) established a system of standardised colours. They were distributed to manufacturers and  Luftwaffe units in Luftwaffe Service Regulation 521/1 (Luftwaffen Dienstvorschriften 521/1) or  L.Dv. 521/1 for short.

Some of these documents have survived the war, The earliest (L.Dv. 521/1) is dated March 1938 and it included a colour table (Farbtontafel). For the aircraft modeller, we are quite fortunate that the regulations stipulated the use of a limited palette of colours. Each approved colour was given an RLM number, presented below (principle and supplementary colours)  with their German and English description.

Even though the Reichsluftfahrt Ministerium has been consigned to history, modellers and model paint manufacturers use the RLM paints codes to this day. A Messerschmitt 109's camouflage might be described by modellers as 65/70/71 and from that you can deduce that the underside were light blue and the upper surfaces painted in a combination of black green and dark green.

Successive regulations were issued from the RLM during the course of the war and this led to an evolution of camouflage schemes as the war progressed. The 65/70/71 camouflaged Messerschmitt 109 described above can be dated to the early war from the combination of blue and greens. In November 1941, L.Dv. 521/1 was revised and a new edition issued which required day fighters be painted, RLM 74/75 and 76 beneath.

In regulations dated July 1944, RLM 74 and 75 were to be phased out and replaced with RLM 81 and 82.  As I'm sure you can appreciate, the normal functioning of the German military disintegrated towards the end of the war as resources came under increasing pressure. It is during the very late war period that the regulations were, to a lesser and greater degree broken and the modeller is faced with an increasing degree of uncertainty about what the correct colour for an individual aircraft might be. To say that this problem is exasperated by black and white photographs is an understatement. As a final hurdle in achieving colour accuracy, there were no reliable paint chips available for RLM 81, 82 and 83 and debate about even the correct colour description continues for this day.

The colours in the table below are less important for the World War Two modeller, although the pre war RLM 61, 62, 63 schemes might be a worthy addition to the paint collection.

All operational aircraft: RLM 70/71 and 65 on the underside.

Collective Communications 1 and 2, released in the summer of 1944 called for:

Battle of France and Britain and the application of RLM 02

Experience from the Battle of Poland influenced the camouflage applied to Luftwaffe aircraft. The dark greens applied to Messerschmitt 109s and 110s were not effective camouflage and made them too easy to spot in the air. The demarcation between the greens and underside blue was raised further up the sides of the fuselage.

In addition to modification of the demarcation between upper and lower colours, there were alternations to the upper camouflage colours.

Initially, one of the greens, either 70 or 71, was replaced by the somewhat lighter RLM 02. In some cases, RLM 02 was applied in addition to the two greens. The Luftwaffe eventually, settled on a change from 70 to 02 with aircraft leaving the factory in a 70/02/65 scheme. Mottles in either RLM 02, 70 or 71 were also applied to the sides of the fuselage giving Lutwaffe aircraft their distinctive apperance during the battles of France and Britain.

Within Sammelmitteilung 1 and 2 there is mention of residual stocks of RLM 70 and 71. With resources under extreme pressure, existing stocks of the discontinued paints were to be used up.

From 1944 onward it was noted that the RLM could no longer guarantee paint shades. Shortage of raw materials began to effect all paint manufacture with variation between batch and manufacturer creeping into the supply chain. The late war period leaves the modeller with a great degree of uncertainly and variety in camouflage colours as the rigid RLM standards began to be flexed by the looming fate of the Luftwaffe.

A separate page has been created that matches RLM colours to readily available brands of model paint. This can be found here.